Study Demonstrates that the U.S. AMI Rate Is Decreasing

A recently published study purports to show that the incidence of acute myocardial infarction (AMI) in the US has decreased over the nine-year period between 1999 and 2008. As reported in the June 10, 2010 issue of the New England Journal of Medicine, Dr. Robert Yeh of Mass. General Hospital and Harvard and colleagues from Kaiser Permanente and the University of California, San Francisco analyzed data from the Kaiser Permanente Northern California integrated healthcare delivery system, which cares for more than three million people and is believed to be broadly representative of local and statewide populations.  The Permanente Medical Group is the largest medical group in the country.

If, as the authors believe, this trend is applicable to the general, non-California US population, it is good news and continues the overall favorable trend in heart-disease-related deaths.  However, the increasing rates of obesity and diabetes remain worrisome, leading to a general concern by researchers that heart-disease-related deaths may level off or possibly increase over the near term future. 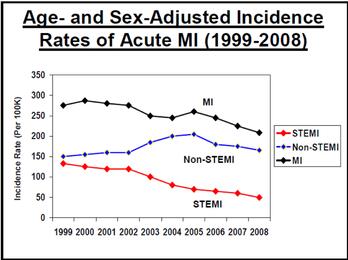 The rate of 30-day mortality after MI decreased from 10.0% in 1999 to 7.8% in 2008.  This was driven by significantly lower death rate among patients with non-STEMI, whereas mortality did not change significantly among patients with STEMI.  Asked why there appeared to be a much larger decrease in STEMI than in non-STEMI over the nine-year period, senior author Dr. Alan Go remarked that this may be due to increased sensitivity for diagnosing non-STEMI with the introduction of troponin tests.

The decrease in the overall cardiovascular death rate is generally attributed to decreases in smoking rates, decreasing levels of both cholesterol and hypertension through aggressive pharmacologic intervention.  Other researchers have pointed out that mortality rates in lower socioeconomic areas have not decreased at the same rate, and increasing levels of diabetes and obesity among this population is a real issue.  Identification and treatment of heart disease continues to improve.  It appears that the public health elements of heart disease focused on education, prevention, screening and early detection, need to catch up.

Continuing the discussion from Part One of physician/hospital alignment and the reemergence of bundled payment initiatives, let’s discuss the impact of health care reform in the area of bundled payment for care.  A national pilot program on payment bundling is included in H.R. 3590, the Patient Protection & Affordable Care Act.  This pilot program is set to commence in 2012 (no later than January 1, 2013) and run for five years.

Although conceptually similar to previous efforts by HHS, this pilot is intended to bundle payment for an entire episode of care inclusive of up to 30 days post-hospital discharge (implying an unprecedented level of physician/hospital cooperation, coordination and collaboration!).  While no identification of covered procedures/conditions has yet been made, but it seems reasonable that major cardiovascular procedures, and possibly certain medical cardiology admissions such as heart failure, will be included as has been done in past pilot projects.  Some other details included in the legislation (and pending final detailed regulations), include the following:

Participation in such a pilot project is always challenging – it must make both strategic and operational sense to the participant(s).  Notice the high level of cooperation, coordination and information required of the participating “entities” especially among hospital and physicians inclusive of both pre-hospitalization, hospitalization and 30-days post-acute care phases!  The work that will need to go into the program design on the part of all of the participants, just to be able to file an application, let alone pull off designing and managing such a program at the local level will be extraordinary.

Will this pilot program “have legs?”  Only time will tell.  However, it is vital for hospitals and physicians to recognize that such efforts will only continue and place an increased burden on hospitals to solidify their alignment strategies with select physicians.  It is hard to image that success under the requirements of care coordination, bundled payment and pay-for-performance scenarios can be possible without the appropriate physician/hospital alignment strategies in place.

CFA will keep you informed on further developments on hospital/physician alignment and bundled pricing, and would welcome your thoughts and comments as we progress. For further information, CFA recommends you review H.R. 3590 and, in particular, the proposed bundled payment pilot program.

Hospital and Physician Alignment in the Cardiovascular Enterprise

Hospital cardiovascular program managers and cardiology, cardiovascular surgery and vascular surgery practice administrators are well aware of the continuing evolution of cardiac and vascular medicine and the multitude of challenges facing each of us.  For cardiovascular program leaders across the country, the challenges of the past will continue into 2010, along with new circumstances requiring creative solutions.  The national debate over healthcare reform that is heating up is leading to more confusion and indecision about the future.  Hospitals and physician practices continue to be inundated with strategic, clinical, financial, operational, and competitive issues that require informed organizational responses.  The possible strategies to successfully address these issues are numerous and varied.

In such times, an approach that pools resources to solidify the program's foundation for the future is critical to short term and ongoing success.  Sound physician/hospital alignment has the potential to be a CV service line transformative strategy that can:

Interested in further information on the topic of Hospital and Physician Alignment in the Cardiovascular Enterprise?  Download a copy of CFA's article Physician and Hospital Alignment Strategies: